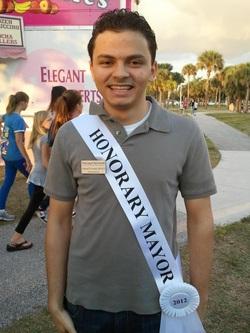 Lehigh Acres has a new honorary mayor who earned the title by raising $164 more than his closest contestant in the competition. The race for honorary mayor is based on who can raise the most money by selling votes.

Ahmed El-Gendy, a technologist in his father's Florida Lung & Sleep Associates, raised $2,680. This is the first year that the Honorary Mayor Contest was sponsored by the Greater Lehigh Acres Chamber of Commerce. For decades, it was sponsored as a fundraiser by Lehigh Community Services.

The announcement was made on the outside stage of the Lehigh Acres Spring Festival on Friday night, March 23 with several hundred people looking on.

See full story at the link below:

The Lehigh Acres Citizen featured the 3rd Annual Kids Fishing Tournament in their newspaper for the week of June 12th, 2013.

The Lehigh Acres Citizen featured a story on Ahmed El-Gendy winning the Honorary Mayor title for the second year in a row.

Florida Lung & Sleep Associates Laboratory has received reaccreditation from the College of American Pathologists (CAP) based on results of a recent on-site inspection as part of the CAP's accreditation programs.

Ahmed El-Gendy wants to be the honorary mayor of Lehigh Acres again for the coming year. He is the first to announce his bid to run again and "buy votes" from the public to help him keep his title.